Why the Rye Fund

PROTECTING OUR PAST - ENABLING OUR FUTURE

Rye is a special place. People come to live in and around Rye because they love it here. But Rye has its challenges that must be met

The Rye Fund announces a new round of grant-giving

Applications are invited from voluntary organisations in Rye and District for grants of up to £2,000 from the Rye Fund.

For further information, visit : Sussex Community Foundation - how to apply
and scroll down to Round 2 – Rye Fund

The Rye Fund at Sussex Community Foundation was formed in September 2008 and gave its first grants out in November 2009.

The Rye Fund is an endowment fund of which an agreed percentage of the annual interest accrued is used to make grants to charities and community groups that benefit the local community, with an emphasis on improving social, cultural and educational provision, promoting the well-being and viability of the market town of Rye as a sustainable social and economic hub of the surrounding community, and improving and maintaining the built environment of Rye.
Since then, the Fund has given grants totaling over £42,000. 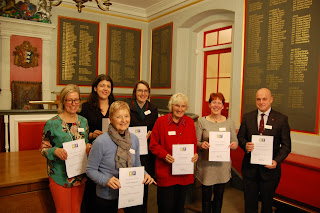 The seven representatives at the Town Hall

Seven community organisations from Rye and district received substantial grant awards from the Rye Fund at a ceremony in Rye Town Hall on Wednesday January 17. The Rye Fund has been making awards of cash to local charitable and community organisations for nine years, and the latest grants were handed out by Charles Bronsdon, chair of the local panel which evaluates applications, and Councillor Jonathan Breeds, the Mayor of Rye.

This year’s recipients showed a breadth of organisations and a range of applications that highlight how the Rye Fund helps community organisations to help a very wide community.

Northiam Community Friends received £500 which it will use to pay for DBS checks for its volunteers as well as training and insurance to enable people in the village to help others.

Peasmarsh Flying Start is using its £1,200 award to pay, among other things for small solid chairs for the toddlers at its pre-school.

ARRCC theatre is using £1,000 to go towards much needed portable heaters which will make the theatre at the Rye Creative Centre a much more appealing venue for wider community use.

Rye Museum’s £751 award will go to pay for a new projector, the current one having packed up, and a range of touchy feely objects like rope, soap and lace for children to handle in order top get to grips with the town’s (ig)noble past as a smuggling venue of international note.

Rye Christmas Festival used its £1,500 award to pay for the specialist skills and workshop guidance that saw paper lanterns made and used by the children from four local schools in a procession that lit up the recent 2017 Festival.

Rye Community Garden was given £500 which will help pay for some much-needed co-ordination form a paid helper in order to drum up interest in the wider community.

Rye & District Community Transport received £1,500 which is being used to support the 326 Bus Service that runs 6 days a week and attracted 21.570 passengers in the year to December 2017.

The Rye Fund was started in 2008 by a group of philanthropists who put £20,000 of their own money into an endowment fund with the intention of using income from the fund to help community organisations. They formed a steering group now chaired by Kenneth Bird, which in turn appoints a Local Panel to assess applications and make grants. The funds themselves, plus charitable status and governance are provided by Sussex Community Foundation, whose Stephen Chamberlain came from Lewes to the ceremony.

Kenneth Bird said: “The fund has grown through investments, government grants and further generous donations from individuals to reach over £120,000. This year we were able to distribute £7,000. Whilst we are very much geared to supporting smaller organisations with grants in the hundreds of pounds if that is what needed, we will next year be able to offer a maximum size of grant of £2000, which might prove more attractive to larger groups.

“The local panel would be delighted to speak to potential applicants and to receive applications ahead of next year’s deadline in the September 2018.  We like to see money working and are thrilled to help local organisations help others!”

The Rye Fund gives grants to local groups - however small - that serve Rye and district including all the villages within about 9 km.

If you would like some advice before obtaining an application form then call Charles Bronsdon on 01797 223560 or send us an email grants@ryefund.org.uk

The awards are made annually, so don’t delay . . .

Aims of the Fund

The Rye Fund aims to keep the best of the old and to encourage new initiatives which carry the very special quality of Rye into the future.

Together, and with longer term vision, we will be able to improve the physical, social and cultural amenities for the benefit of all the residents of Rye and surrounding villages.